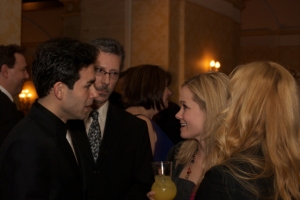 Last week was the League of Chicago Theatres benefit and it was a great party. The League honored some of my favorite people and Chicago greats including Criss Henderson and Barbara Gaines from Chicago Shakespeare, Janet Davies from ABC7 and Marcelle McVay from Victory Gardens Theater. It was like the “Who’s Who?” of Chicago theater. What I loved most about the evening was the acknowledgement of a theatre community that, since the 1970s, has been a tight knit family. Never could you imagine so many people working in the same business who are all so in love with not what each of us does but what the collective creates. Like any family, over three decades, we have had our battles, egos and best of all dramas, but in the end “we are a family.”

In addition, Broadway In Chicago awarded the third annual Emerging Theatre Award. The 2009 recipient was the side project and Adam Webster, founder and Artistic Director, accepted the award. This award means a lot to Broadway In Chicago. Not only is it an opportunity for Broadway In Chicago to contribute financially to young company but to be able to interact throughout the year with valuable guidance. This is also a time for the entire community to acknowledge a company that is poised to go to the next step. This is a very special award as it is one of the few that is chosen by the company’s peers in the industry.

The evening was topped off when Dominic Scaglione Jr., star of JERSEY BOYS, sang “Can’t Take My Eyes Off You” to Janet Davies, who was given the Tribute Award. She is definitely “too good to be true.” Following Dominic was a performance from our own Elle Woods, Becky Gulsvig.

3 responses to “we are family”