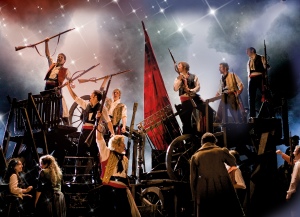 This past week was filled with nostalgia and many happenings!

On Tuesday, we had a great event: a conference for marketing directors across the country for LES MISERABLES. Chicago is an early stop for the 25th Anniversary Tour of Les Mis and this conference gave people an advance look at the show that will be coming to them in the months ahead. It also gave them valuable time with the company that routes the tour across the country and oversees the marketing and advertising for the show. Our marketing and sales people sit down at these conferences and share what we did in Chicago, giving them valued insight on what worked and what didn’t. And for LES MIS – everything works! It was nostalgic for me because this is one of my favorite shows and the songs bring back so many memories. Plus we get to work with folks from the Broadway Booking Office NYC, who are all close friends. We have worked with them on so many shows including JERSEY BOYS, BEAUTY AND THE BEAST, SCROOGE, PHANTOM… but what makes it even more special is that my daughter, Julia D’Angelo, now works for them! So I have the awesome pleasure of having both my name and my daughter’s name in the same programs.

Next was a moment so sad but also so heart-warming.  I went to the memorial service for Joyce Sloane. She was a mentor to me, a women that had made it by starting out as a group sales person for Second City before eventually becoming the Associate Producer of the company. I always looked up to her as someone who was a magnet for talent and so successful but with a big heart.  Many call her the “mother of Second City,” but she was more than that – she was a mom to much of the Chicago Theatre Community. I sat in front of Stephen Colbert and behind Tim Kazurinsky at her memorial service, which was befitting of the matriarch, a queen. That is what she was for all of us.

Then it was off to the opening of RAIN. This was nothing but pure nostalgia. Sitting in the Oriental Theatre and hearing all those songs, was like listening to the songbook of a lifetime, with all the memories that come with it. Memories that were both private and public, from my first kiss to the assassination of President Kennedy.  The audiences went wild! Don’t worry if you missed it. From the audience reaction, I am sure it will be back.

Closing the week was the dress rehearsal of WORKING. Stephen Schwartz is in town for it, and what an amazing dress rehearsal – not a stop from beginning to end! In watching the show it brought back memories from the first time that I saw it at the Goodman Theatre. How things have changed! This new production is so fresh from beginning to end, starting off with taped interviews with Studs Terkel and the people he interviewed for his book. The stories that he brought to life out of those interviews are both touching and inspiring and the music that was created for this musical are nothing short of the brilliant–they are on the same level as the stories themselves.  I also loved the fact that the taped cutting features Studs interviewing a worker in Cicero. While I grew up in Berwyn, all my best friends lived in the neighboring town Cicero… what great memories.

This Thursday, February 17th, be sure to watch the ABC 7 Mayoral Debate live from

Broadway In Chicago’s Oriental Theatre. The even is sponsored by community organizations including the League of Chicago Theatres and the Chicago Loop Alliance.  Tell us what you hope to see our next Mayor champion for in the arts and I will enter you for the chance to win tickets to the live broadcast of the Mayoral Debate.

Filed under Broadway In Chicago, Les Miserables, RAIN: A Tribute to the Beatles, Working