This has been an amazing ride. My Show Choir director saw a flyer about the IHSMTAs at a competition and handed it to my mom with the statement that I should try to do this. While we talked a bit about it, because I was knee-deep in rehearsals for our Spring Musical the Wizard of Oz, I was honestly only half listening. I was focused on memorizing, blocking, character building to make Dorothy as real as she could be. Mom took pictures, Dad worked video magic, we all talked some, and then sent my application off in the mail without thinking much more about it. I didn’t figure it would really amount to anything given that it was for the whole state. 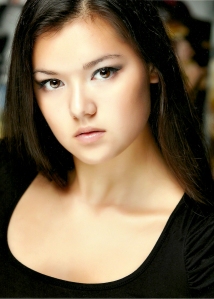 I was floored when the call came that I was a finalist. All I could think of was “I was a what?” and “I have to be where?” Then the list came out of all the students who were participating and I thought “Wow, those are some big schools”. O’Fallon has a great music program, but I had seen a lot of other schools through show choir competitions that were up in those areas and it always seemed like they were incredibly talented. I spent a lot of time talking with my Choir director and my Show Choir director and finally came to terms with the fact that whatever was going to happen would happen and so long as I gave it my best shot, I could be proud and they would be proud of me. The day of the IHSMTA competition came and it was amazing getting to work with the crew from the Jersey Boys. I could hear a lot of the other students with their big “belty” songs and realized that “Somewhere Over The Rainbow” just wasn’t that kind, so I honestly didn’t figure that I’d stand out in anyway. So I went into my audition with the thought that I was there for the experience and to do the best I could. I honestly didn’t think I heard right when my name was called for the IHSMTA actress winner. When I realized I had to sing again, all I could think of was please don’t cry. My mom laughed when I was talking to her on the way home after, because I told her that “I didn’t cry, but thought I would start now”; and I did. I bawled.

Then came the preparation for New York. Talk about a nerve wracking experience in preparing. Working on four songs, not knowing what questions to ask, but knowing you should have a million of them. Trying to figure out how to connect to new characters for the songs that were to be competition possibilities. I was more nervous getting ready for New York than I was in New York. Our chaperone Jamie was fantastic. She was a girlfriend, chaperone, and mom all rolled into one. I know Nathan and I could never thank her enough for her support. Her enthusiasm totally helped put me at ease. It was my first airplane ride, first taxi, first trip to New York…lots of firsts. New York was…EXHAUSTING. Long days of rehearsals, real life working with Broadway professionals, and staff at NYU. There was definitely a “Reality” to the whole experience if you’re truly interested in going into Musical Theater. There were times that you feel really good about it, and times that you second guess what your doing with your performances. Some people you connect with and some that you realize you can respect, but just wont’ connect with. It’s a “total” learning experience. It was incredible being with other students that love the same thing you do and not have to deal with all the “high school pettiness” of jealousy and talent because your all there for the same reasons; your all talented or you wouldn’t be there. Everyone was very supportive of each other. I don’t know if it is that way every year but it was wonderful in that way this year for me. I made some amazing friends and worked with people that I’ve only ever dreamed of meeting. Yes, I jumped up and down when meeting some of them, even though I promised myself that I wouldn’t do that. Thankfully, they were all so very gracious about it. Auditioning was nerve wracking, but I came to the point during that week where I decided that no matter what happened, so long as I gave it my best shot, I could be proud of myself. Performing on a Broadway stage…well there is nothing like it, no comparison. It did reaffirm though that I want to be in Musical Theater more than ever.

I hope that Illinois can be proud of Nathan and me. We worked hard, learned a lot, and sure gave it our all. I know that I’m going to be forever grateful for the opportunities that have come about because of winning the IHSMTA award. It has given me more opportunities and new experiences that I ever dreamed would happen at the age of 16. I certainly go into my Senior year with eyes wide open as to what I want to do with my life and how hard I’m going to have to work to make it happen. Who knows, maybe sometime in the next five to ten years, it’ll be Nathan and I there inspiring students just like us. Definitely worth adding to my list of goals. Thank you so very much for all your support of us. You have definitely become part of our extended Broadway family. I won’t ever truly be able to express the amount of emotions that go into this experience but know I have grown tremendously and I can totally contribute a lot of it to this amazing ride.