do you wanna dance?

Ballet and Boxing….what a great time! On Saturday, I went to Pritzker Park where the “Eye” is and had a ball watching the Joffrey and Lake Shore Athletic teach Ballet and Boxing – both take focus and what I learned is that everyone can have fun doing both – young and old, male or female – it was a blast! Make sure to check out the other exciting free events with the cast of BILLY ELLIOT. 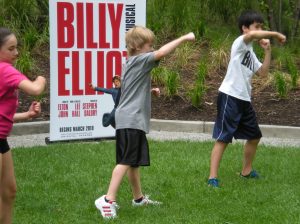 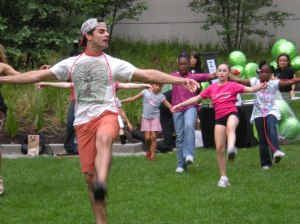 This week we are planning the opening ROCK OF AGES and the opening of our new theatre THE BROADWAY PLAYHOUSE. ROCK OF AGES has taken off and looks like it will be a sell out. This is a show that will have you rockin’ in the aisles of the BANK OF AMERICA THEATRE, so don’t wait and hear the words sold out! Same for the opening of the BROADWAY PLAYHOUSE! AN EVENING WITH SUTTON FOSTER ticket sales have taken off and you don’t want to be left behind. To have the original star of five Broadway shows perform in such an intimate space and be the first to see the theatre is a priceless experience. Don’t miss out!

REMINDER: Only two weeks left of SHREK THE MUSICAL! It is a great summer night out for the whole family.

Eileen mentioned yesterday that this Saturday, BILLY ELLIOT is sponsoring a Ballet and Boxing Event in Pritzker Park underneath the Tony Tasset installation “EYE.” The Joffrey is handling the dance portion and Lake Shore Athletic Clubs are handling the boxing portion…and they are handing our jump ropes! I am a big fan of jump ropes. [picapp align=”right” wrap=”true” link=”term=jump+rope&iid=3340076″ src=”http://view3.picapp.com/pictures.photo/image/3340076/high-skips/high-skips.jpg?size=500&imageId=3340076&#8243; width=”234″ height=”300″ /]

Years ago, I walked into a ballet class at Chatham College and saw a really big guy jumping rope. I mean REALLY BIG – over 6′ 4″ and 300 lbs. Miss Audrey (I’m not kidding, that is actually what we called her) gathered us together and swore us to secrecy. The young man had been sent by his agent in preparation for his tryout with the Pittsburgh Steelers. The poor guy really stood out in a class of females, ranging in age from 17 to 70 but we welcomed him.

Especially me! At last someone would be a worse dancer than I was! Oh, but I was wrong. Miss Audrey told us to leap (jetes) across the room. I heard a thump and saw the football player had taken out a bunch of ceiling tiles but darn, he landed on his toes with arms extended like Baryshnikov.

After the class I was complaining to my friend Debbie. “Why would a football player who never danced a second in his life take to ballet so quickly?” Debbie replied, “Coordination?” Ah, must be nice.

At the end of the season he didn’t make the Steelers but did join another team for a couple of years. He encouraged me to jump rope as he did – it would help my coordination. Not so much, but I still jump rope.

where, oh where, are the BILLYs? 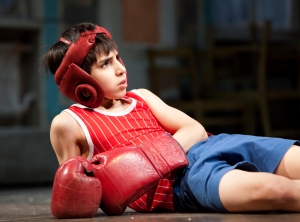 On Tuesday, the Billys were all over Chicago taking photos on famous iconic Chicago places. Billy at the Bean – Billy at the Picasso – Billy at Buckingham Fountain. BILLY is going back to school and in preparation they are enjoying their last days of Summer in Chicago and working on their health, fitness and fashion. Given how talented they are I am going to follow all their recommendations.

Be sure to join them at:

Join cast members from BILLY ELLIOT, instructors from The Joffrey Ballet and Instructors from the Lakeshore Athletic Club for a fun, free, family morning of Ballet and Boxing Instructions at Pritzker Park under “Eye”

And, of course, you simply must see BILLY ELLIOT! You can do it with your kids with this special offer – Kid’s Free through September 16.

For more information on all of these Back to School events, click here.

turning over a new leaf…

I have started exercising again, watching my carbs and I am back on my weekly blog visit after a wild two months with more events than I can retell! 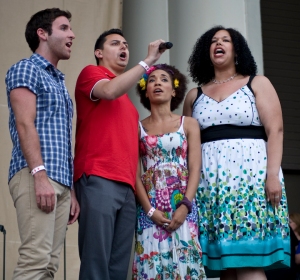 Then there was the exciting opening and fond farewell to FUERZA BRUTA. It was one of my favorite shows that I was so hoping would take off but it was admittedly a stretch for Broadway In Chicago. While the audiences that saw it loved it, it just didn’t have the staying power that we had all hoped for, but what an adventure it was for all of us! We will miss all the gorgeous cast and crew as they travel back to Argentina. 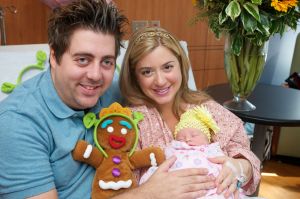 And then the opening of SHREK THE MUSICAL. WOW, it has been awesome! We had lots of excitement including the star of the show (native Chicagoan Eric Petersen) having his first child during previews as his wife delivered at Chicago’s own Northwestern Memorial Hospital. The Hospital and staff were so great and both Mom, Dad and the Hospital shared the new born princess Sophia with the world when they allowed ABC to come in and film the new happy family. Then on to a grand opening night with Jeffrey Katzenberg and the CEO and CFO of McDonalds (love that they stopped flipping hamburgers to enjoy a night of theatre and SHREK). That night was amazing – as the helicopters from Transformers 3 hovered 50 feet over Daley Plaza just a block away from the theatre, all of the celebrities arrived. And thankfully Transformers completed their filming 45 minutes prior to the start of the show – perfect timing. The performance was great – as Dean Richards says, “A Must See…for everyone from 8 to 80” and he is right! Such a funny, elaborate, great night out. I mean really? Who doesn’t like a good fart joke and tap dancing mice? And who showed up on the green carpet? None other than the four BILLYs from BILLY ELLIOT. 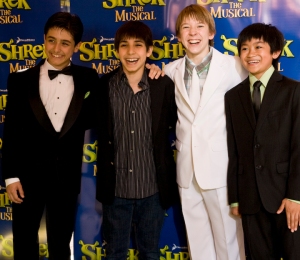 The stars of Billy Elliot walk the green carpet at the Shrek The Musical opening.

Speaking of BILLY ELLIOT, the show is steaming through the summer and if you are around you want to be sure to go and see it as it will only be here through January 15. Now is the time as they have the most amazing Back To School With Billy Program that includes Kids Free at the theatre with a paying adult. Check it out!

I couldn’t be happier with this summer – a true celebration of 10 years of Broadway In Chicago. In typical style, I was having so much fun – just couldn’t find the time to write.

Last week, BILLY ELLIOT officially opened in Chicago with the show’s composer, Sir Elton John, in the audience. And now it’s official, Chicago loved BILLY ELLIOT! Here’s what the critics had to say:

“IF YOU ONLY GO TO ONE SHOW THIS YEAR – MAKE SURE IT’S ‘BILLY ELLIOT’!” – Bill Zwecker, Fox Chicago

“SO JOYFUL IT TAKES YOUR BREATH AWAY!” – Barbara Vitello, Daily Herald

“WATCH OUT CHICAGO. ‘BILLY’ WILL LEAP INTO YOUR HEART!” – Janet Davies, ABC 7 Chicago

There are still tickets available. The best availability in the next two weeks?

Make sure to check out the newest Billy webisode as well! It has footage of the opening night performance and party plus Sir Elton himself! 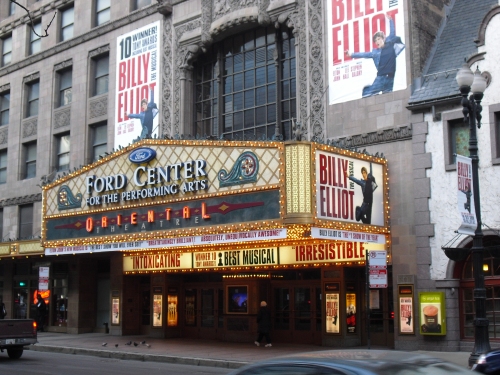 Click here to get your tickets now for the April 11 performance. There is a good chance a certain music legend/composer/British knight, along with other celebrity guests, will be in attendance.

See you at the theater!

Such a great time of year!

Passover, Easter and Spring is trying to bloom! Plus the Macy’s Flower show right here on State Street in the heart of the theatre district. No better time than now to take a stroll down State Street – visit the new Block 37 Mall or Macy’s; have tea time at Argo Tea or dinner at one of Broadway In Chicago’s great partner restaurants , all before you see a show in one of our magnificent theaters. There are still tickets available for the upcoming week – the best availability is below.

BEAUTY AND THE BEAST

See you at the theater! 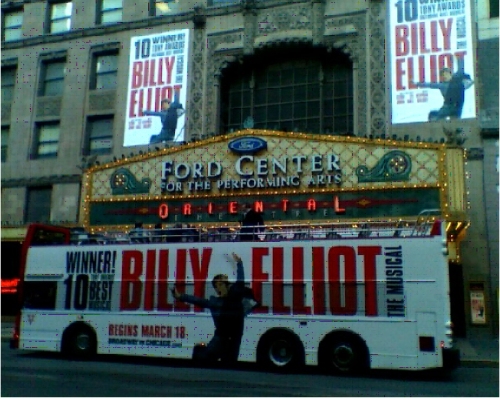 The bus pulled up in front of the Oriental today and off came four BILLYs and over 40 other cast members that are set to dazzle Chicago unofficially on Wednesday night at the special invited dress rehearsal and Thursday night at their very first public performance. I could not be more excited – the theatre is ready for the sound of applause. And applause there will be for a production that was put together with love and is rumored to be the best production of BILLY ELLIOT to date!

I have a special treat for someone – let me know what the movie Green Zone and musical Billy Elliot have in common and you will be entered to win two tickets to the EXCLUSIVE INVITED DRESS REHEARSAL OF BILLY ELLIOT. Leave your answer in the comments by 10 am on Wednesday (3/17) and we’ll announce the random winner at 10:30 am (Central time, of course!). We’ll email the winner the details.

IMPORTANT NOTE: For all those that read this blog, do yourself a favor – do not wait to buy your tickets to BILLY ELLIOT. Buy now, go now, and for the best seats, come Easter Weekend!

UPDATE: Our winner is Witness Yi!  Make sure to check your email for details about tonight’s dress rehearsal. Congratulations! 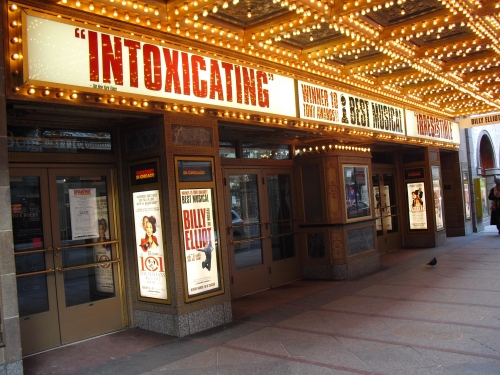 I love the idea of rush seats – tickets on the day of the show for just $25! I wish every show that came to our theatres would have a rush policy. I especially like it when a show decides not to make a student rush with ID but just a rush. I used to walk by the Bank of America Theatre on my way to work in the morning when JERSEY BOYS was playing and see all the excited people in line – people of all ages and backgrounds chatting as they waited for the box office to open. You could feel their excitement.

BILLY ELLIOT just announced rush seats! Day of show ten tickets will available at the Box Office for $25. Not just for students! Not just for seniors! Come on down to the Oriental Theatre. When the Box Office opens at 10:00 (11:00 on Sundays), the first people in line will be able to buy two tickets per person. Make sure to check out all the details here.

I can’t wait until March 18 when BILLY ELLIOT begins. I wonder how many people will be in line that morning.

march to the theater this month 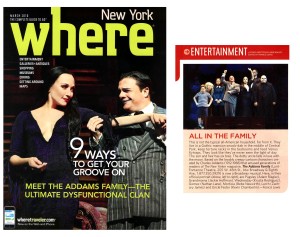 ‘WHERE’ DID THE ADDAMS FAMILY GO?

It went to Broadway and from what we hear, the show is in great shape. Pictured on the front cover of Where magazine, they are set to draw that beautiful red curtain again, beginning March 8, revealing the ultimate dysfunctional family that Chicagoans fell in love with and soon New York will too.

MILLION DOLLAR QUARTET begins previews in March too. Chicago looms large on Broadway this month! And when both of these shows become big hits we can all say – we saw them in Chicago first!

What’s next this month at Broadway In Chicago….

Will we see you at the theater this month?