The Road to Jersey: A Nick Cosgrove Guest Blog 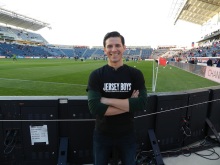 I originally saw Jersey Boys when it was the sit down production here in Chicago.  I was 17 and a junior in high school at the time.  I had been singing and acting throughout my adolescence, but it wasn’t until I saw Jersey Boys that I knew that this was what I wanted to do with the rest of my life.  I remember being mesmerized by the story, the music, how quickly the set changed; the list goes on and on.  Of course I knew a career as an actor is extremely terrifying since there isn’t always certainty if you’ll work.  But I grew up having parents who taught be to have patience, be persistent, and have a quiet confidence.

I studied at Carnegie Mellon University where I received my BFA in Acting/Music Theatre.  It’s there where I trained and honed in my craft. CMU’s acting program is fantastic with alumni such as Ted Danson, Holly Hunter, Patrick Wilson, Zachary Quinto and Megan Hilty.  I graduated and got an agent from our senior showcase.  I spent one last summer performing at The Muny down in St. Louis and soon after moved to New York.  I spent my first year auditioning for a numerous amount of projects, doing a few readings and workshops, an Off-Broadway show and also a few regional productions.  But my eyes were set on.  I auditioned for the first time in September of 2010.  From then on I had about 6 more auditions throughout the year until I booked the job this past November of 2011.

It has been an absolute dream come true portraying the role of Frankie Valli in Jersey Boys.  I feel extremely honored and humbled to be given the opportunity to share this story with audiences who keep coming back to see this show.  You can’t help but fall in love with one song after the next.  And yet you also learn about a group of four guys, you see what they went through to become Rock and Roll Hall of Famers, and that it didn’t just happen overnight.  This show is so well constructed that it is far from a “juke-box musical.”  I would say that it a mixture of a play and a rock concert.  Rich in its context, and unforgettable in its music.  Certainly not one you want to miss if you haven’t seen it yet.

It’s been such a treat to be performing here in my hometown and getting to see so many family members and friends after the show.  I’ve been lucky enough to be asked to sing the National Anthem at a few of Chicago’s games.  Last week I sang at the Chicago Bulls and the Chicago Fire games.  I grew up seeing so many Bulls games so that one especially hit home for me.  What’s most incredible is to be in the Bank of America Theatre where I first saw the show 6 years ago, dreaming of one day being a part of it.  I have never felt more gratitude taking my bow every performance.  Thankful to be getting to do what I love, and hoping that our performances continue to touch and inspire others just as I was 6 years ago.

2 responses to “The Road to Jersey: A Nick Cosgrove Guest Blog”